What is an accent, and how can it be improved? 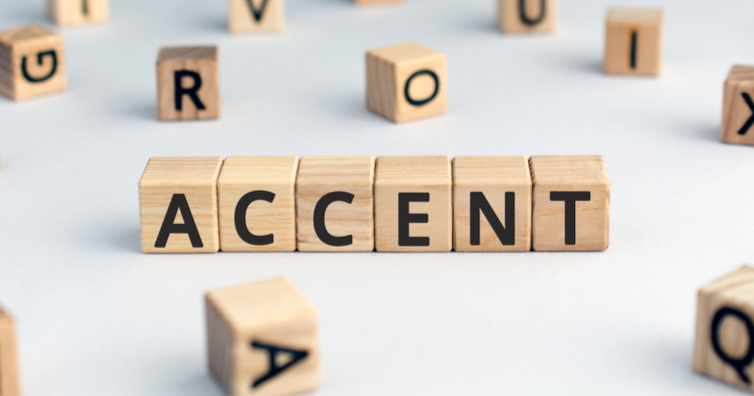 We often hear people say that someone has an accent as if it was a striking characteristic. But is it?

Roberto Rey Agudo, Language Program Director for Spanish and Portuguese at Dartmouth College, defends that, from a sociolinguistic point of view, having no accent is plainly impossible.

We all have an accent, whether we realize it or not. In fact, many of us even have a few different accents, depending on our linguistic repertoire.

Accents are a result of how, where, and when we learned the language we are speaking. Therefore, the premise that people can speak a language without any accent is a deceitful one. Accents are inevitable. But they are also way more complex than what meets the eye (or, in this case, the ear).

And that brings us to another question: can we even differentiate an accent from a dialect? Or recognize how an accent might determine the success of a communication attempt? To answer these questions and a few more, we have created a small guide about this rich linguist component.

From the official accent definition to a few tips to improve it, we will cover all the main things you need to know in the next paragraphs.

What is an accent? And what is the difference between an accent and a dialect?

An accent is a way of pronouncing a language. Considering that all of us speak in distinctive ways, it is reasonable to assume that there are endless types of accents in the world, or even inside a country or region. Let’s think of the United States of America, for instance. English might be the most commonly used language, but we all agree that the way people speak in Texas has nothing to do with the way people talk on the West Coast.

According to the sociolinguist definition, an accent is “a manner of pronunciation peculiar to a particular individual, location, or nation.” While an accent uniquely refers to how people pronounce words, a dialect is defined as “a regional or social variety of a language distinguished by pronunciation, grammar, or vocabulary.” Dialects are, therefore, way closer to the concept of language than accent. In fact, to avoid the messy connotations of these two terms, many modern linguists are now using the word “variety” instead. The word refers to variation in the language, and it is used to group linguistic clusters in a more exacting way.

Why do people have accents?

First, it is essential to establish that there are two types of accents: a foreign accent, which occurs when we speak one language using some of the rules or sounds of another one, and our native language accent, which can be determined by our region, ethnicity, or social group. In both cases, the accent comes from our living (and learning) circumstances. When speaking a foreign language, our accent is influenced by the structure and sounds of your native language, which is why it is usually more noticeable. For example, if you are a German trying to learn English, you are likely to have trouble with the sounds found at the beginning of the words wish and this, because they don’t exist in German.

In short, people have different accents because they have different heritages. Sound patterns also differ from language to language, but they can also vary within the same language as Canadian English and South African English. As many studies conclude, even ethnicity, class, gender, sexuality, and age can all affect language usage.

Which language has the most accents?

Virtually all languages have some kind of accent variations, and that is the reason why it is practically impossible to answer this question. English, for instance, being the most widely spoken language in the world, has many known accents, from Australia to Canada. Even inside these countries, many different accents can be found. Other languages that have a lot of accents? Undoubtedly Mandarin and Spanish, which also have millions of native speakers.

Now, in terms of popularity, studies have found that British is the most likable accent globally. According to Manchester University data, 45% of respondents stated that they enjoy hearing their native language spoken with a British accent. Who would have guessed?

Is it bad to have an accent?

An accent can be a beautiful thing, as it is a part of your identity and heritage. However, you must always assess if it is getting in the way of your intelligibility. On occasions where you are trying to make yourself understood in another language, a marked accent can be an obstacle and even damage your relationships.

If your goal is to improve your communication skills so that your peers, customers, and friends always understand the important things you have to say, you should definitely evaluate your accent and ask: can people understand me well enough for the purposes of my use of a determined language?

Considering that many adults have unintelligible speech patterns that often interfere with their education, profession, and social interactions, working on the accent is regarded as a priority in language learning. After all, there is no point in managing the most complex verb forms or vocabulary if you can’t make yourself understood in a simple phone call…

How can an accent be improved?

Accents are not fixed, which means that they can be changed and improved. For many people, it can come naturally (by moving to a different country, for instance), but, for others, it requires a lot of commitment and hard work.

There are many ways for you to improve your accent. One of the best and easiest ways to do so is by listening. Movies (ideally with subtitles), songs, Ted talks, podcasts… any of these resources can be very helpful. By listening, your ear understands the musicality of a language and what it should sound like, making it easier for you to grasp the small details.

Then, it is all about practice. Talk with native speakers, read out loud, and repeat words and sentences from movies and podcasts. With dedication, you will start feeling more familiar with the desired accent and capable of replicating it.

What if the accent is too difficult to learn?

If after all the effort you still feel that learning a determined accent is too tricky, you should consider taking classes or applying for accent reduction training. This technique, also known as accent neutralization, can help you embrace the phonology and melodic intonation of the desired language, by focusing on listening and speaking exercises.

At Language Advantage, our team of native teachers can help you learn the language and accent you pretend, by designing a customized program for your needs and goals.

If you want to receive more information about our language courses, teaching techniques, and prices, feel free to contact us. We will be delighted to guide you through your options!