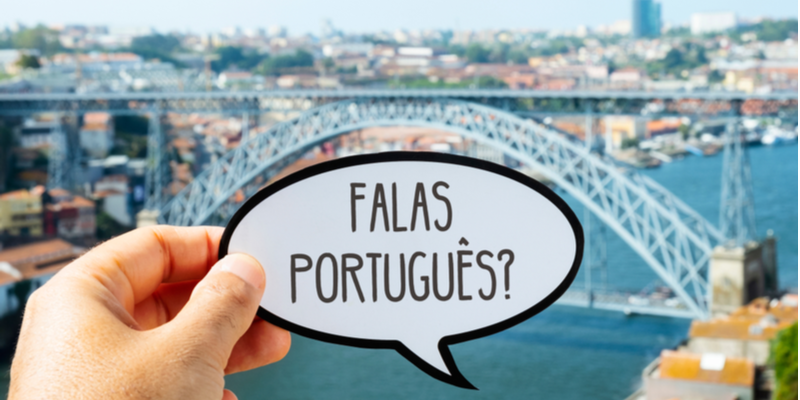 Portuguese is a fascinating language that evolved from several dialects of Vulgar Latin. As part of the Ibero-Romance groups, it is quite similar to Spanish, but full of charms that are quite unique to the lusophone people. Would you like to know more about this beautiful Romance language and start learning?

Here is a quick walkthrough:

Where does the Portuguese language come from?

Portuguese roots were established when the Romans introduced Latin as the official language in the Iberian Peninsula. During that period, the territory was invaded several times by the so-called barbarian tribes, but the Vulgar Latin managed to survive and prosper. With time, along the Atlantic coast, it gradually evolved into Galician-Portuguese, which was a mix of local dialects and Latin. It was only after the incorporation of Galicia into Spain and the independent development of Portugal that these languages were split into Galician and Portuguese.

Decades down in history, Portugal’s colonial and commercial empire spread the Portuguese language across the globe, from Brazil to Timor-Leste, in what became known as the “Great Discoveries”. As expected, the language evolved quite differently in each territory. Nowadays, Portuguese has many dialects and accents, from the African creoles to Macanese Portuguese, and they are all connected within the Lusophone group.

Is Portuguese similar to Spanish?

As history suggests, Portuguese and Spanish are very similar. For a long time, the Iberian countries had the same language that evolved differently but kept a lot of resemblances. In fact, the two languages share a lexical similarity of almost 90%, which means that, on paper, they look quite alike. But do not get your hopes too high: spoken Spanish and Portuguese are way less mutually intelligible than their written forms.

While the two languages share a lot of cognates, they also share a lot of false friends that can lead to confusion. For instance, while rato in Spanish refers to a period of time, it means mouse in Portuguese.

In short, though being native or fluent in one helps with learning the other, you will always have to actually learn. For instance, you can’t visit Brazil speaking Spanish and expect people to understand you.

Brazilian Portuguese and European Portuguese might seem the same to a non-speaker, but there are many differences between both countries. The main one is definitely pronunciation. Brazilians speak vowels longer and wider, while Portuguese people pronounce the words with a more closed mouth. As a result, Brazilian Portuguese is often considered more melodic and even easier to learn.
Then, just like it happens with American and British English, there are some differences in vocabulary. For example, a teacup in Portugal is called chávena, while in Brazil is xícara.
Finally, there are also remarkable differences when it comes to formal and informal speech. For instance, Brazilians use você (you) in informal and formal settings, while Portuguese people use tu (you) in informal conversations. In Portugal, the pronoun você is only used in formal contexts.

In any case, it is important to make clear that both languages are virtually the same and that most Portuguese and Brazilians have no trouble understanding each other. Only a strong accent could make a conversation somewhat difficult.

Should you invest in learning Portuguese?

Saying that Portuguese is a beautiful language might not be enough to convince you to learn it. So here is some data: as statistics conclude, there are over 236 million Portuguese speakers across the continents, which makes it the 7th most spoken language on the planet, right after Arabic and Bengali. Brazil and Portugal are most known as Portuguese speaking countries but you can expect to hear people communicate in Portuguese in Mozambique or Macau.

And it doesn’t end here! According to UNESCO’s estimations, Portuguese is the fastest-growing European language after English, and it has the highest potential for growth as an international language in southern Africa and South America. Needless to say, for studying, traveling, and working abroad, knowing Portuguese can be a great advantage, especially considering that it is a growing language in two continents.

Is Portuguese hard to learn?

It depends. If you already speak a Romance language (ideally Spanish), it will be way easier for you to learn Portuguese, as they all share the same Latin root. However, if this is going to be your first Romance language, be ready to face some challenges! Like its Romance language counterparts, Portuguese has different verb conjugations for each person, which can be considerably difficult for a native English speaker, just like the gendered nouns. However, the biggest challenge is probably the tricky pronunciation, which is, like we have mentioned, a lot harder than its sister language, Spanish. To facilitate the process, you can opt to learn Brazilian Portuguese, since it is way easier to replicate.

In any case, learning a new language is always faster (and considerably easier) if you join a course. If you are interested in learning Portuguese and hope to do so through immersion, it is worth considering doing classroom education alongside or before.

If you are interested in learning Portuguese for business or for personal needs, Language Advantage might be the right choice for you! Our native teachers, experts in all levels of language training, can help you achieve your goals by offering you personalized programs. No matter your needs, we can design a language training program to fit your availability, so that you can start talking in Portuguese as soon as possible.

To receive more information, please feel free to contact us at info@language-advantage.com. We will be more than happy to tell you more about our programs and methods!