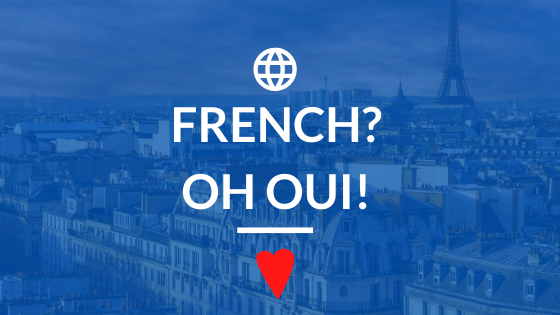 When it comes to romance, there’s no language like French. It is known worldwide as one of the most – or probably the most – charming language there is, thanks to its unique flow and élégance. But where does that gracefulness come from?

Long before it was France, Gaul, as it was known to the Romans, was occupied by many Celtic tribes. After the Romans conquered it, the native Gaulish was supplanted, and Latin, the founder of all Romance languages, became the land’s official mother tongue.

The Germanic invasions which followed – known as the “barbaric invasions” – made Gaul fell into the hands of the Franks. As a result, Latin was further diluted.

With time, from a fusion of Germanic, Celtic, and Latin roots, French finally emerged. By the middle of the 14th century, it became the most spoken language in Europe, receiving the title of lingua franca of international diplomacy. It was only after World War II that it got surpassed by English.

It sounds classy, romantic, and sophisticated… but there’s so much more to French than meets the eye (or ear)! Here are some interesting facts:

-Counting in French seems reasonable .. until you hit the number 70! After that, get ready to put your math to test. An example? Eighty translates to quatre-vingts (four-twenties). And eighty-five? Quatre-vingt-cinq (four-twenty-five).

-When in France, you may feel like the default answer to almost every question or suggestion is “non” (no)… but it doesn’t necessarily mean disproof or refutation! In fact, the word “non” is usually used as an “invitation” to start a debate or simply as a way to engage in a deeper explanation/argument.

-Did you know that many words you use in everyday conversations are actually French? Silhouette, cliché, novel, avant-garde, R.S.V.P. (which stands for Répondez S’il Vous Plaît)…

-Here’s an unexpected historical fact: about 75% of French citizens did not speak French as a native tongue at the time of the French revolution. In fact, it was more spoken in Holland and Germany than in many parts of France. And although today everyone in the country speaks fluent French, there are 28 different accents and dialects across France – without considering other varieties, such as Québécois or French Creole.

The importance in the world

French is the official language in 29 countries, which puts it in second place behind English. And if that doesn’t convince you of its importance, take note: French is also one of the fastest-growing languages in the world. According to demographers1, the total number of French speakers could rise to as much as 700 million by 2050, due to population growth in Africa.

So, whether you want to do business in Senegal or Canada’s second-largest market, Quebec, learning French will assuredly give you a competitive edge. Keep in mind that, since many companies in these countries operate strictly en Français, speaking their native tongue will make it easier to build trust and successful business relationships.

On top of that, French gives access to great works of literature, films and songs as well as fashion, cooking or architecture, offering a different perspective of the world.

French is not difficult to learn, at least compared to Icelandic, but there are a few things you should be prepared for. For instance, French has a substantial number of conjugations and verbes irréguliers that can seem immensely difficult at first sight, especially for native-English speakers. Besides that, grammatical gender can also be tricky (beware: une table, a table, is feminine, while un bureau, a desk, is masculine). Nevertheless, for many learners, the most difficult part is the pronunciation, especially when it comes to words like serrurerie (locksmith) or heureuse (happy). But don’t despair: if you already speak a Latin-based language – such as Spanish or Italian – learning French will be easier!

At Language Advantage we use a client-centered learning methodology.

All our French language courses are highly flexible and focused on meeting the needs of each individual client. Our language assessments, programs, and teaching methodology are tailored to each client or group class. We are currently working in three main sectors: Law Firms, Mining, and Financial Institutions but we also help clients in other sectors. Every time we work with a new client we are also learning. We try to get as much information as possible about their company, their role and their learning objectives. It is in fact a team effort. My experienced instructors and I are here to guide you through this process! Let’s start!

Learning a new language means acquiring a new culture and mindset; once you are comfortable with these new language skills, they open doors into a more welcoming and interactive environment

Learning French at the office has been a great way to get to know other members of the firm while working my brain in a different and challenging way. Often, taking a break from my work to attend French class serves as a great re-charge; I find that I come back to my desk refreshed and with more focus. It certainly helps that I am learning a beautiful language, with a great teacher! Merci Sylvie!!